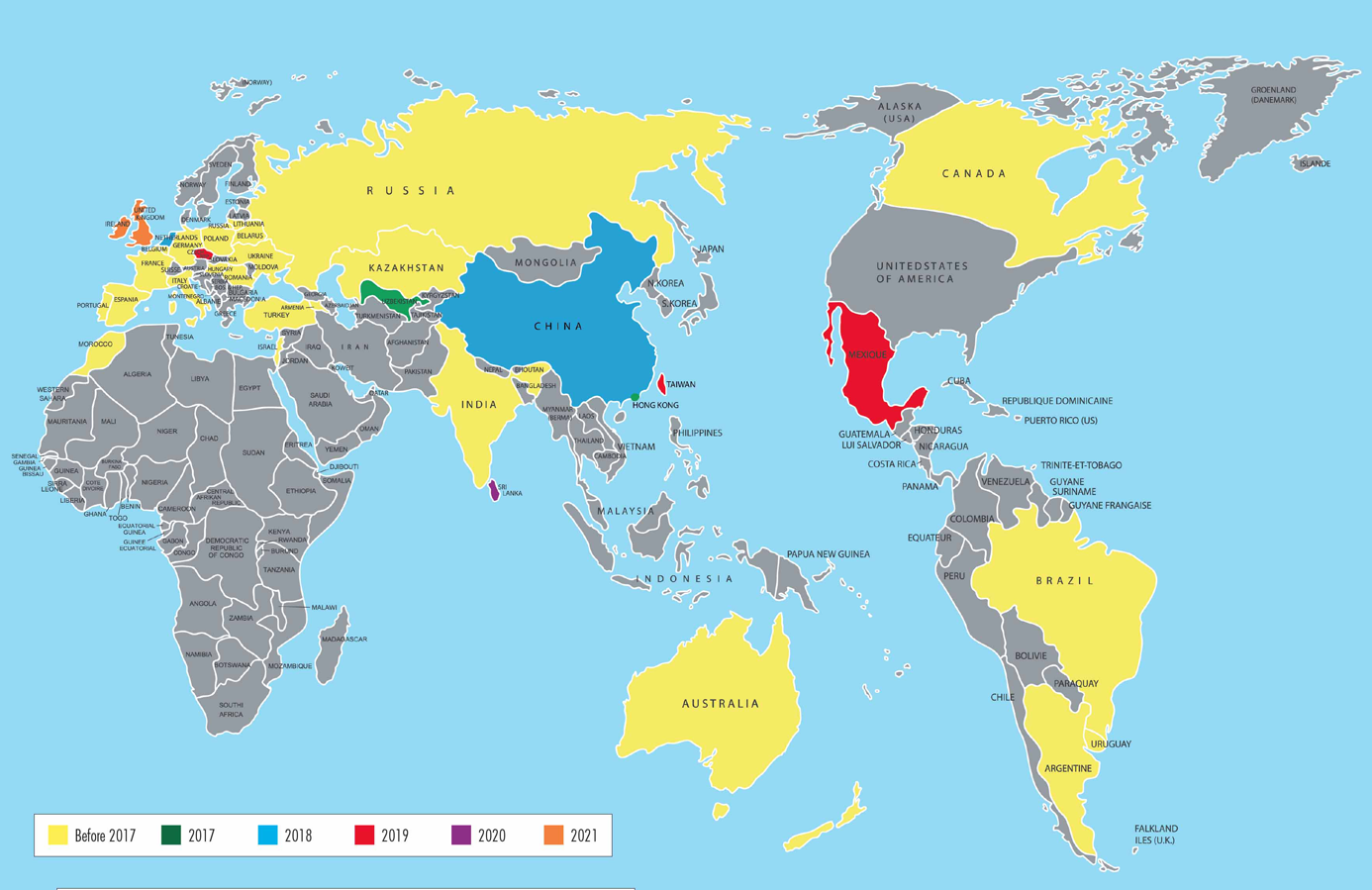 ERREPI HISTORY IN THE WORLD.

Errepi’s appreciated over thirty years activity has allowed the company to be present on all continents. The constant attention to innovation and the efficiency of its machinery has also been appreciated in the major exhibitions in the Label sector.

Listed below are the major successes achieved by Errepi, starting from 2000.

2021 Errepi signs a partnership and enters in the Great Britain thanks to the sale of an automatic turret rewinder Leonardo. The American multinational with production in Mexico purchases 4 automatic rewinder Tiberino. Errepi continues the positive trend started in 2020.

2020 Despite the problems related to pandemic, Errepi can boast a balance higher than the previous year and the opening of a new market in Sri Lanka.

2019 LabelExpo Europa, Brussels. This exhibition represents an opportunity to sell Errepi products in the Czech Republic, Taiwan and Mexico.

2018 China and Netherlands are the two new markets in which Errepi enters.

2016 Errepi can boast a significant increase in turnover. The considerable technological improvement, and consequent optimization of the machinery, guarantees the consolidation of relationship with old and new customers. The company’s technicians are studying new projects capable of making the machinery increasingly cutting-edge and faithful to market demands.

2015 LabelExpo Europe: during the event, Errepi enriches the list of contacts and concludes new sales, thus consolidating markets in which it was already present.

2011 LabelExpo Europe: we present the compact die cutter R-Dante 330 with the electronic register mainteinance of the pre-printed webs, the modular flexo printing machine Galileo 500 with 2 printing unit UV, the automatic NON STOP turret rewinder Leonardo 500 without glue, the automatic core cutter machine Vittoria 1600 and the inspection machine Giotto 330. We enter in the Israelian market. This important event ensures the sales of an Errepi machine also in Israel.

2010 Open House: we introduce the Leonardo 520mm with the systems to start the rolls without glue and to close the rolls by printed labels and the semi-automatic cores cutter Vittoria.

The company consolidates its presence on the French market.

2009 LabelExpo Europe: we show the Dante 350 and the automatic no stop turret rewinder Leonardo 350. Errepi enters the Spanish market.

2009 Converflex, Milan: we introduce the compact die cutter “Dante 350”, the automatic no stop turret rewinder “Leonardo”,c the inspection machine “Giotto 350” and we show the “Speedy Cutter 1600”.This is the opportunity to enter a new market: Armenia.

2008 Open House: we show the new inspection machine model “Tutor 350mm”. The event guarantees the sale of Errepi machinery in the French and Hungarian market.

2007 Medprint, Rome: we introduce the 2 colours shaftless machine Reflex 350mm with hot/cold foil and the inspection machine Univer 350mm. It is an opportunity to discover a new market: Lituania.

2004 Romexpo, Bucharest: we show a new version of the machine for blank labels moine with the rewinder Rotor 350mm we discovered the North African (Morocco), Turkish and Asian market.

2003 Paris Exibition on labels: we show the 4-color Planet machine with Rotor 350. The first machine is sold on the Russian market.

2002 Verona, Italy: we introduce to the market the machine for blank labels moine with the rewinder Rotor 350mm.

2001 Romexpo, Bucharest: we show the Rotor 350mm rewinder, thanks to which the company sells the first machine in Romania.